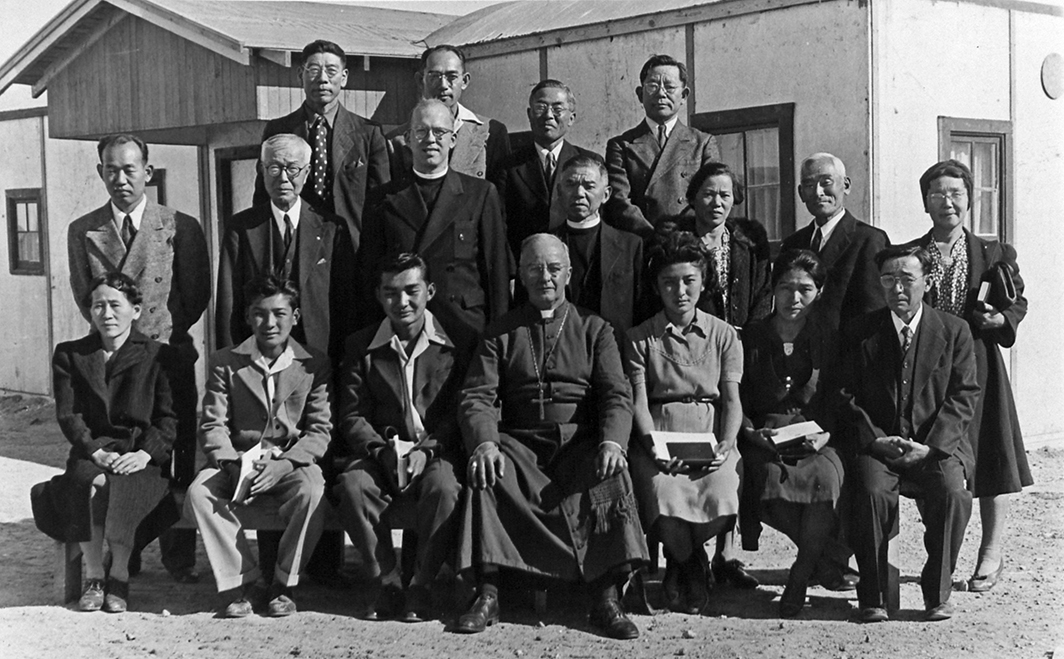 In the southwest corner of St. Matthew’s Cathedral in Laramie, Wyoming, there is an unassuming stained-glass window that you would miss if you were not looking for it. With the cathedral lighting turned off, the window shines radiantly in the darkness. With the backing of the bright afternoon sun, the purples, reds, and yellows illuminate a man clutching a pearl in his right hand. The blue and white text at the bottom reads, “To Luke Yokota, merchant, priest and saint, who found one pearl of great price. By his bishop and fellow clergy. Born in Japan buried in Lander.”

This luminous dedication to Rev. Luke T. Yokota, titled The Pearl of Great Price, is a fitting tribute to the humble unassuming man whose “smile [and] infectious laugh” infused his dedication to his life’s work for the Episcopal Church. However, Yokota’s life was not without suffering. Like 120,000 other Japanese Americans, he experienced the darkness of racism and the trauma of incarceration behind barbed wire during World War II.

Luke Tadazumi Yokota was born on January 13, 1887 in Mito, Ibaraki-Ken, Japan, where he spent the entirety of his childhood. He was baptized at St. Steven’s Episcopal Church in 1905, just before emigrating to the United States. Yokota landed in Vancouver, British Columbia, and took up residence in the dormitory at the Japanese Episcopal Missionary Church in Seattle just two days after his arrival. Wasting no time, Luke helped to establish churches up and down the west coast, starting with the Episcopal Missionary Church in Tacoma, Washington.

Though he stood  just over five feet tall, Luke soon became an evangelical force to be reckoned with. He moved to southern California in 1911 and began what he called a “pilgrimage of all protestant denominations,” referring to himself as a “stray sheep.” He continued his dedication to his faith by establishing the Japanese Presbyterian Church in Long Beach, California in 1916.

After returning from a brief visit back to Japan in 1918, Luke met with Rev. John Yamazaki, the head of St. Mary’s Episcopal Japanese Mission in Los Angeles. Yamazaki convinced him to return to the Episcopal Church. Shortly thereafter, Luke was confirmed as a Lay Reader into the Diocese of Los Angeles.

In just a few brief years Luke met and married Takeko Nagai in 1922. They would eventually have three children together: Margaret Yukio born in September 1923, Paul Hiromu born in May 1925, and Joe Susumu born in January 1927. For the next twenty years, Luke raised his children with Takeko while working as a social worker for St. Mary’s.

In addition to being a social worker and Lay Reader, Luke was heavily involved in almost all other aspects of church life. In a letter to Bishop Winfred H. Zeigler, the Bishop of the Diocese of Wyoming at the time of the incarceration, Luke listed his activities at St. Mary’s, including teaching at the Japanese Language School and the Sunday school for over 300 children. He took part in the leadership of the Church Boy Scout troop, helped with the young people’s group, wrote and issued the church bulletin in Japanese, participated in the Brotherhood of St. Andrews, served as contact with other denominational groups, and represented St. Mary’s at the Diocesan Layman’s Group. Luke admitted that he may have done too much to really dedicate himself to any one thing, but believed that all this experience prepared him for the challenges he was to face in Heart Mountain.

The Yokota family was forcibly relocated to Heart Mountain from the Santa Anita detention facility on September 8, 1942. Their assigned residence in the camp was at block 28, barrack 17, unit D. After entering Heart Mountain, the Yokotas quickly found jobs throughout the camp. Luke was hired as a dishwasher in the mess hall, making $16 a month. Additionally, he was elected block chairman, where he would help resolve complaints of block residents and meet with other block chairman in deciding what issues to bring to the camp administration. Margaret took a position with the recreation department. Joe and Paul worked outside the camp as beet laborers, harvesting beets when they were not in school or participating in the boy scouts, bringing the total family income to $32 per month. Once again taking on too much, Luke also began organizing an Episcopal Church group. Takeko assumed Luke’s dishwashing position when the group, and Luke’s responsibilities, began to grow.

Founded in late 1942 by Luke, Shoji Nagumo, Eddie Matsuda, and Yoshio Saito, Heart Mountain’s Japanese Episcopalians consisted of 10 families from St. Mary’s Church in Los Angeles and  six other individuals, bringing the group total to 79 people. Beginning on September 20, 1942, Rev. John F. McLaughlin from Christ Church in Cody visited the camp bi-weekly to minister and give communion to the incarcerees. However, McLaughlin admitted that, if not for Luke, “there would be no work done within the Center by [the] Church.”

The Episcopal Church was extremely enthusiastic to hire Luke and wanted to grant him the “special rating as the religious worker of [Episcopalian] communion.” This served two purposes. First, It allowed the Church to compensate Luke for his work, as he had given up his secular duties as both a dishwasher in the mess hall and as block chairman in order to fulfill his duties to the Church. Second, Bishop Zeigler and Bishop Charles S. Reifsnider, the primary man in charge of overseeing the nine Japanese American Episcopal congregations in the camps, believed that granting Luke this status would give him—and consequently the Church—more legitimate standing with the Japanese Interdenominational Minister’s Council at Heart Mountain.

On October 9, 1942, almost a month to the day since the start of the Yokotas’ incarceration, Luke was appointed a Lay Reader for the Missionary District of Wyoming and paid $25 dollars a month from the Church’s “Japanese” fund. One day later, he was accepted as the Episcopalian representative to Heart Mountain “at a joint ministerial conference” of Japanese American ministers. For Luke, this was the first step to achieving his dream of becoming an ordained clergyman. He had wanted to be ordained since his time at St. Mary’s, but instead prioritized securing a comfortable living for his family and ensuring his children could go to college. He felt that his twin goals of clerical service and economic stability were incompatible.

While at Heart Mountain, Luke’s interest in being ordained was rekindled. Bishop Zeigler and other clergy members were extremely supportive of Luke joining the ministry and regularly encouraged him in their correspondence. However, Luke later revealed that he also lacked confidence because he believed his “lack of clerical education” to be a hinderance.

Nonetheless, in 1943 Luke T. Yokota became “postulant for the deaconate” and quickly took up full-time responsibility for the Episcopal Church group at Heart Mountain. His daily routine mainly consisted of clerical studies in the morning and administrative duties—such as making calls, writing bulletins, and keeping up with correspondence—in the afternoons. On occasion, the Yokota family would also host white Church members from the surrounding community in the camp.

That same year the Episcopal group at Heart Mountain was officially recognized by Bishop Zeigler as The Church of the Atonement, with Luke at its head. Though the Episcopal Church originally wanted all nine congregations throughout the camps to have their own church buildings, they soon realized this was impossible and that they would need to share worship space with the rest of the religious organizations in the camp. Cody Christ Church donated a retired altar, organ, and other furnishings to the camp recreation hall that would serve as home for the Episcopalian meetings and other protestant services. Hymnals and prayer books were furnished by Episcopal societies across the United States. By the end of 1943, The Church of the Atonement at Heart Mountain was recognized, furnished, and led.

The Church ran smoothly and without incident through 1944, and Luke kept much of the same schedule. Luke’s daughter Margaret left camp to attend college in April 1943, and sons Paul and Joe relocated outside Heart Mountain on May 22—Joe for university and Paul for unknown reasons. Only Luke and Takeko remained in the camp. This was a common pattern throughout Heart Mountain after the government permitted Japanese Americans to “resettle” in cities away from the West Coast. Young adults left for work or school, while their older parents stayed behind. By January 1945, The Church of the Atonement’s membership had dwindled to only five families.

On January 25, 1945, Luke Yokota was ordained deacon at St. John’s Church in Powell, Wyoming. Thereafter, he served as vicar of the Church of the Atonement at Heart Mountain Relocation Center. He discharged his duties as vicar throughout the spring and summer of 1945, until he and Takeko left Heart Mountain just before it closed, on November 9. However, this was not the end of Luke and Takeko’s story in Wyoming.

The Yokota’s moved to Ethete, Wyoming after leaving camp, where Luke continued to serve his parish and the Diocese of Wyoming. In 1946, Luke achieved his dream and was ordained a priest in the Episcopal Church at St. Matthew’s Cathedral in Laramie, Wyoming. However, the dark cloud and long shadow of racism still haunted Luke. When he first began conducting services, there were many in the Diocese that actively avoided his services, owing to the continued prejudice and racial bias against Japanese Americans. This discrimination is starkly visible in a photograph of a meeting of Wyoming ministers in 1948. On the corresponding name page, Luke’s duties as missionary to the Japanese community in Wyoming are described as a “Jap Work”. This would not stop the interminable Luke Yokota; he continued his ministry throughout Wyoming for the next decade. He was a regular attendant of Wyoming Clergyman meetings, and accompanied Bishop James W. Hunter, the new head of the Wyoming Diocese, to Detroit in January 1955 to attend and speak at a missionary conference. Perhaps one of Luke’s happiest acts of service came in 1955, when Paul returned to Wyoming to be married by his father in Ethete to his wife Mary Shizue Hirano, with Joe and Margaret at his side.

Only a year later, Luke passed away on August 28, 1956. He was buried in Lander next to Takeko, who lost her battle to an extended illness three years previously. He was beloved by his parishioners and the Wyoming Episcopal community as a whole, evidenced by the large number in attendance at his funeral. Many openly wept at the loss of “Father Luke,” as he was affectionately known. Two years later, on October 26, 1958, people from around the state gathered on a crisp Wyoming Autumn day for the dedication of a new stained-glass window at St. Matthew’s Episcopal Cathedral. While Luke Yokota’s window honors his contributions to the Church, it also stands witness that his life in Wyoming was the result of forced relocation and incarceration of Japanese Americans during the Second World War.

Special thanks to the archives of the Episcopal Church, Diocese of Wyoming and the American Heritage Center at the University of Wyoming for the use of their collections in researching this article. This article was made possible through the support of the Embassy of Japan in the United States.

Krist Jessup is a Yonsei Japanese American from Laramie, Wyoming, where he is the Assistant Supervisor of the Content Listing Unit at the American Heritage Center. He is the descendant of an incarceree of the Santa Fe detention facility.