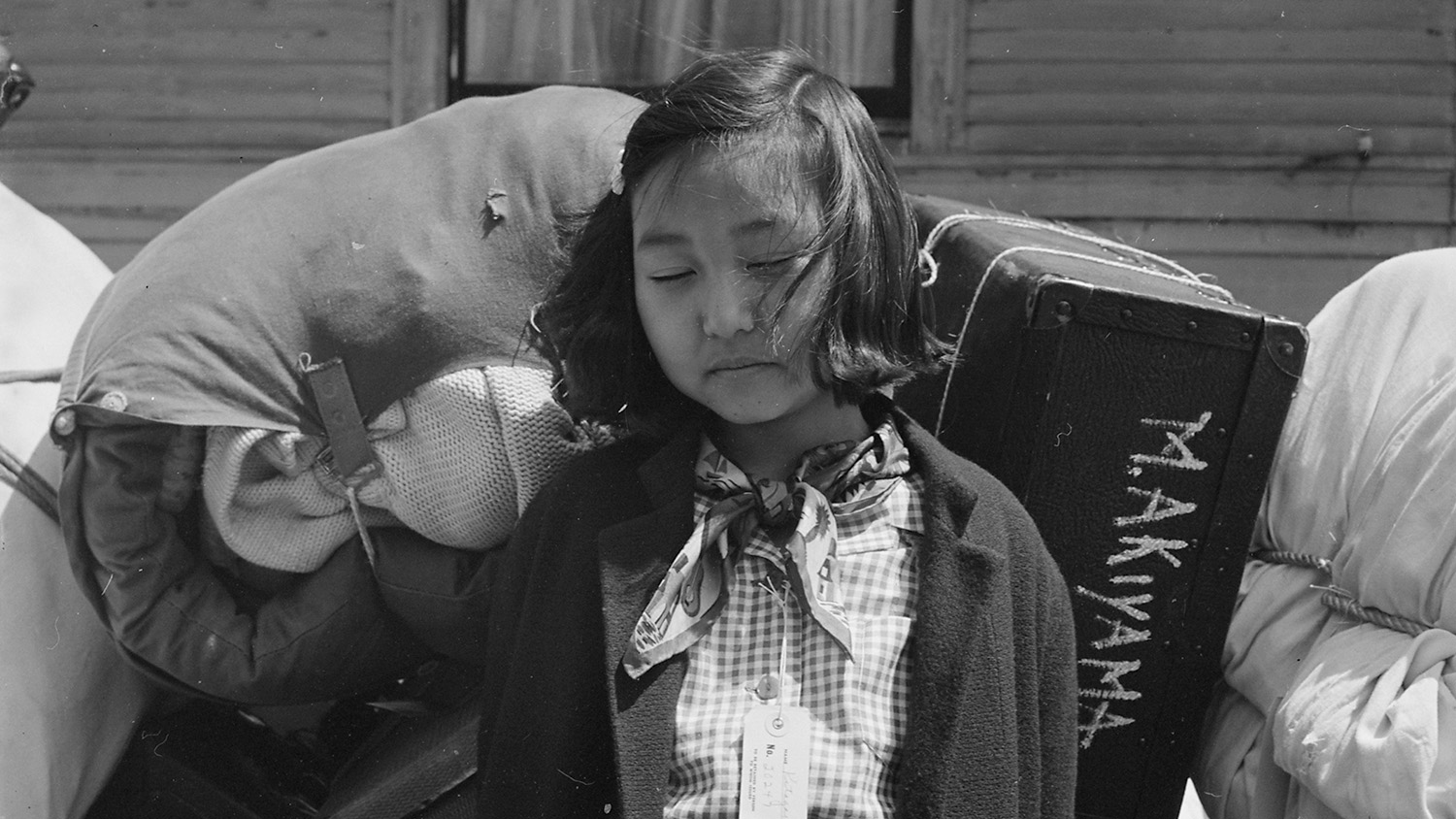 Each of the over 14,000 individuals who were incarcerated in Heart Mountain had a name. But in their forced removal from their homes into concentration camps, they were treated by the U.S. government as an undifferentiated and inscrutable mass of “Orientals,” assumed to be perpetually un-American, if not outright anti-American.

The main difference between the U.S. government’s selective internment of Japanese, German, and Italian nationals and the mass incarceration of the entire West Coast Japanese American community was the lack of attention to the humanity of each person as an individual. Whether one was an American citizen or not, a newborn baby or an infirmed grandmother, anyone with “a drop of Japanese blood” – as Colonel Karl Bendetsen put it – was removed from their homes and herded en masse behind barbed wire. Despite the United States also being at war with Nazi Germany and Fascist Italy, there was no mass round up of the entire German American or Italian American community during WWII; only the Japanese American community was so targeted.

This smearing of an entire ethnic group as a threat to the nation, undeserving of the Constitutional guarantees of due process, was part of a much longer history of differential treatment of immigrant communities in America, especially those that crossed the Pacific from Asia. When the first Japanese immigrated to work on Hawaiian sugar plantations, the plantation overseers – unable to pronounce the names of the workers – simply called them out by their numbers, commonly stamped onto a metal disk called “Bango” (literally “number” in the Japanese language) attached to the migrant workers. Of course, this practice of dehumanization by the erasure of names has an even longer history with enslaved Black Americans on the cotton plantations of the American South.

The Irei Names Monument project is my attempt to repair this history of discriminatory racial exclusion and marginalization – with a goal to, for the first time, recall the names of all persons of Japanese ancestry who experienced incarceration during WWII in the various types of confinement sites; including those facilities run by the Army, the Department of Justice, the Wartime Civil Control Administration, and the War Relocation Authority. As it turns out, compiling an accurate and comprehensive list of names is rather daunting. It’s not a simple matter of merging camp rosters, incarceree-created directories, and transfer lists. Due to the use of aliases, clerical errors by government typists, multiple romanization systems for Japanese names, and inconsistent rendering of names (such as flipping first and middle names), we must study traditional Japanese naming culture, practices of Anglicization and abbreviation amongst Japanese Americans, and nomenclature conventions of the 1940s. Thousands and thousands of names on forms are either misspelled or in need of verification, and government records often render the same person’s name differently in the documents from the period.

Take, for instance, the famous actor and social activist George Takei. His name is rendered in the Final Accountability Roster of the Rohwer camp as “Hosato George Takei.” Since his family transferred to the Tule Lake camp in 1943, he is also listed in that camp’s Roster, but this time as “Hozato George Takei.” So how should we list him in our names monument? The Japanese kanji characters for his first name in the rosters can be romanized as either “Hosato” or “Hozato.” Technically, both renderings are plausible. In this case, I just asked him. He affirmed that “George Hosato Takei” would be most appropriate. In line with honoring the preferences of incarcerated camp survivors over government listings (especially when he never recalls having ever used “Hozato” with the “z”) and that fact that his birth certificate lists his name as “Hosato Takei,” it makes good sense to choose the Rohwer rendering over the Tule Lake one. Furthermore, he related to me how the name “George” was added to his official birth name: “I remember my father telling me when I was a boy in the Rohwer camp in Arkansas that I was named after George VI of England. My father was an Anglophile who had all the Kings and Queens of England memorized. He thought it was propitious that his son would be born just before the new King of England was to be crowned in 1937. I was born two months before the actual coronation.”

Thousands more individuals, most of them less well-known than Takei, have these types of discrepancies in the government rosters. Creating an accurate list means resolving these issues. George Makoto Fujita (b. 1927), found in Heart Mountain’s Final Accountability Roster, provides a good example. Fujita was also incarcerated in Jerome, where he was listed without a middle name, and in Tule Lake, where he was listed as Makoto George. We resolved this particular case by referring to his wartime draft card, which has “George Makoto Fujita” in his own handwriting, affirming the Heart Mountain rendering.

To determine authoritative names, beyond standardizing nomenclature conventions, it’s helpful to understand naming culture among Japanese Americans of the period. In general, Japanese have a broader variety of surnames than other East Asians. For example, the majority of Koreans share just four surnames – Choi, Kim, Lee, and Park. However, certain family names were common among Japanese immigrants to the U.S. In Heart Mountain, for example, the most popular family names were: Yamamoto (179 individuals), Nakamura (138), Tanaka (117), Yoshida (111), Sakamoto (106), Nakano (97), Ito (94), Watanabe (90), Shimizu (83), Hashimoto (79); Uyeda (78), Matsumoto (74); Kato (67); Yamashita (62), and Suzuki (61).

It is not surprising that Issei immigrants from Japan carried across the naming practices from Meiji-period (1868-1912) Japan, the era of the initial emigrations out of Japan. Certain types of Japanese first names that may have sounded archaic to younger Japanese Americans dominated the older generation. In Heart Mountain, the oldest individual listed in the Roster at the time of its compilation was the 93-year old widow Eka Inouye, who had lived in Los Gatos, California before the war. Female names of the older generation in the Wyoming camp like Kiku, Kiyo, and Tama tended to be two-syllable names. Younger Japanese women  often had three-syllable names with the female “-ko” ending, like Kimiko, Masako, or Yuriko. Male names often ended with “-ichiro” [lit. “first son”]  (Genichiro, Yaichiro), “-jiro” [lit. “second son”] (Arajiro, Enjiro, Kinjiro, Masajiro, or Takejiro), or “-taro” [lit. “eldest son”] (Kentaro, Kumataro, Kyutaro, Shintaro, or Shotaro). These types of names were most common among the members of the community in their 80s and 90s in Heart Mountain.

The Meiji government tried to abolish – unsuccessfully – certain names associated with the older regime. Name endings such as “-suke,” for instance, corresponded to government ranks from earlier periods. But a survey of Heart Mountain Issei includes elders named Hirosuke, Kichisuke, Tatsunosuke, and Toranosuke.

In stark contrast to those who kept such archaic names, one Issei in this oldest demographic, Joe Negishi (b. 1864), simply adopted an Anglo name. Others, such as George Genichiro Kobayashi (b. 1867) and George Yonekichi Kitasako (b. 1869), combined their given Japanese birth names with an Anglo name that they adopted in immigrating to the U.S. For Issei who immigrated from Japan later, as well as for Nisei , this hybrid Anglo-Japanese system of first and middle names was quite common. One way of pairing the first and middle names was to find Anglo names that matched the Japanese name either by sound or by meaning. Heart Mountain incarcerees Meriko Mary Nishiyama, Roy Rioichi Shundo, Kunio Coonio Shimizu, Tom Tsutomu Sakamoto, and Sam Isamu Ohira all adopted Western names that sounded approximate to their Japanese names. On other occasions, names would be paired by meaning. Lilly Yuriko Namba and Lily Yuriko Oka are examples of associating “Yuri” (the Japanese word for the flower species “lily”) with Lilly and Lily.

Especially with Nisei, another form of Anglicization of Japanese names that non-Japanese had trouble pronouncing was the practice of abbreviation. Mitsuuki Shimamura went by “Mits” and Shigeo Sumihiro became “Shig.” Mits and Shig not only played into the culture of informality and nicknames practiced broadly by Americans and specifically by the Nisei, but also made their multi-syllabic Japanese names more accessible to white Americans.

So what’s in a name? Behind each name are family stories and cultural heritage. For the Irei Names Monument project, to create a comprehensive and accurate names list of all persons of Japanese ancestry who experienced incarceration during WWII, is to remember and repair. The Japanese word “Irei” means to console the spirits (of those who’ve gone before) and we do so by recalling their names – in our project, in the form of a book of names, a website, and a physical installation.

In the Japanese Buddhist tradition, we have a practice called “nenbutsu”, which is typically understood as the practice of chanting the name of the Buddha. But in its earliest meaning, it was the practice of visualizing and recalling (nen) the absent Buddha (butsu) – an act of imagination to manifest that which had become distant through the passage of time. As the immigrant generation (Issei) and their U.S.-born children (Nisei) pass away from Japanese America, their journey of belonging in our nation as immigrant families must be honored. When we recall Japanese American names from Heart Mountain and the other confinement sites, we enliven and re-member individuals who had their human dignity erased by our government.

Duncan Ryūken Williams is Professor of Religion and East Asian Languages & Cultures at the University of Southern California and Director of the USC Shinso Ito Center for Japanese Religions and Culture. In his newest book, American Sutra: A Story of Faith and Freedom in the Second World War, Williams reveals how Japanese Americans broadened our country’s concept of religious freedom and forged a new American Buddhism.

This article was made possible through the support of the Embassy of Japan in the United States.